Can "Moneyball" be applied to hiring lawyers in law firms? 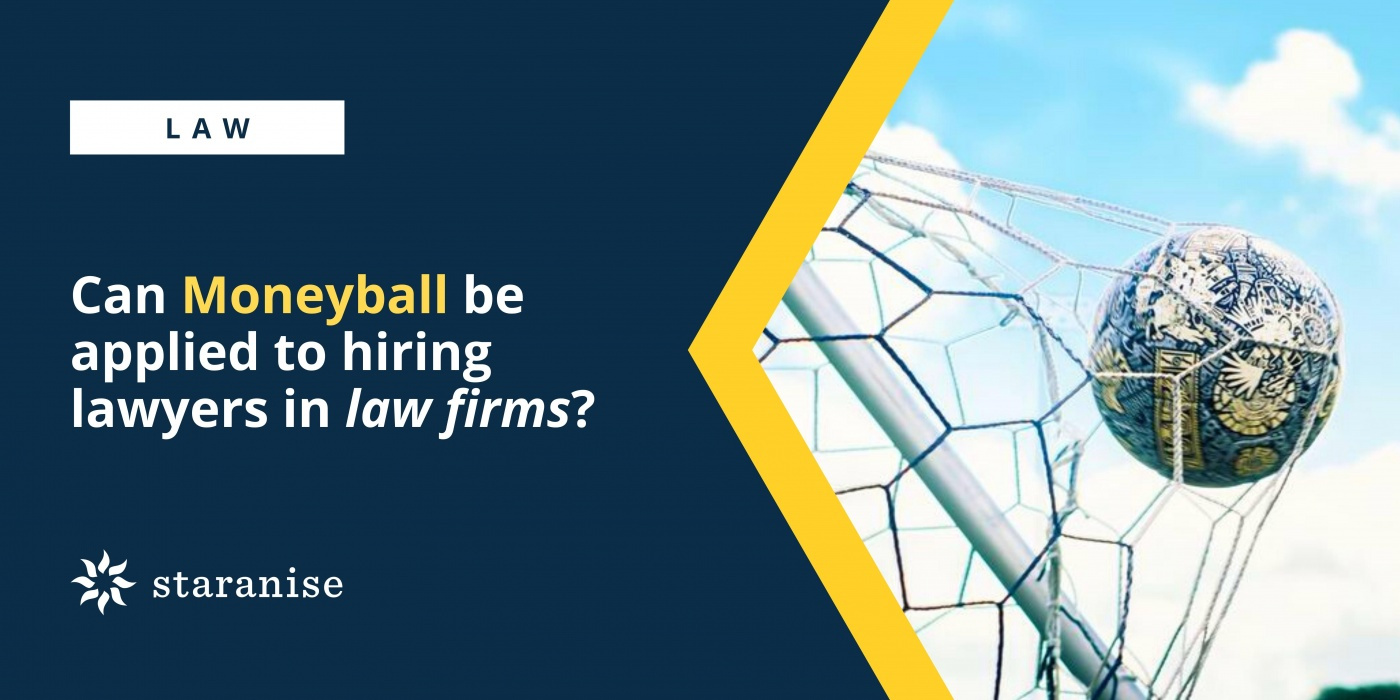 What is data? Is it just a bunch of mumbo jumbo loved only by train nerds and the Privacy Commissioner for Personal Data, or could data be used by law firms to gain a cutting edge in their recruitment of lawyers?

If the world of professional and elite sports is anything to go by, law firms can, and should, punch well above their weight or be leftfield in their recruitment choices by taking a more in-depth statistical approach to identify and hire the next elite-level lawyer, or an outlier, as Malcolm Gladwell would say.

American author Michael Lewis wrote a book called Moneyball: The Art of Winning an Unfair Game, which inspired the Hollywood multi-Oscar nominated movie starring Brad Pitt. This book explores the methods of Billy Beane, the GM of a lowly baseball team in the US who adopted what we now know as sabermetric principles to field a winning team of unknowns, often on below market salary rates  (compared to the big teams).

Sabermetrics aims to quantify baseball players’ performances based on objective statistical measurements as opposed to the traditional views to measuring someone’s value, such as pitching wins or runs made, which weren’t terribly efficient metrics.

As a result, Beane's team, The Athletics, reached the playoffs in 4 consecutive seasons from 2000 and were ranked with a 5th best regular season record whilst being ranked a lowly 24th out of 30 in player salaries (i.e. they were at the lower end of the pay scale). The A's has since won several more titles to strengthen their reputation as a solid team.

Since then, the principles of Moneyball have also been adopted by Major League Baseball team Boston Red Sox who won their first major league title in 2004 for the first time in 86 years (since 1918).

The ethos of Moneyball has inspired English Premier League football team Liverpool FC to develop arguably its best ever team in the 2021-2022 season. Since their manager, Juergen Klopp, joined the club in 2015, their net spend (total purchase price less total sale prices of players) has amounted to £115.74million, and in this period they have won the league title in 2020, the Champions League in 2019, the UEFA Super Cup in 2019, the FIFA Club World Cup in 2019, and most recently, the Carabao Cup in 2022.

In this current season (2021-2022), with five games to go to a pulsating climax, Liverpool FC are just one point behind leaders Manchester City, have won the Carabao Cup, are in the finals of the Champions League, and will be meeting Chelsea FC in the FA Cup final in May. Now, there is talk of the team winning the never-to-date achieved quadruple of titles this season, such is the strength and quality of this team.

Compare that to the net spend of Manchester United in the same period, £603.01million, in which they have won the FA Cup and the FA Charity Shield in 2016, and one Carabao Cup in 2017. None of these awards is as prestigious as the Premier League or Champions League titles, and nothing has been won by this team in the five seasons since their last cup win.

Leicester City’s statistics also play out favourably with their league title in 2016 with a very modestly priced team against ‘big’ teams such as Manchester City, Manchester United, Arsenal, Liverpool and Chelsea.

Going back to the 1990s, the football industry in the UK was simply dismissive of the use of statistics in understanding why some teams are more successful than others. Any thought of using more complex data beyond corners taken, possession stats and shots on goal were met with derision.

Today, professional football teams invest a fortune in data teams and statistical analyses. Complex computer algorithms are used for every top tier professional game and terminology that includes expected goals xG, post-shot expected goals, expected goals assisted, PPDA (opponent passes per defensive action), and possessions/sequences now form common vernacular in football discourse. And there are more metrics being used when it comes to an individual's performance on a pitch, such as the average speed, total distance covered in a match, number of tackles won/lost, successful passes, clear cut chances, and so on.

Every move is dissected and evaluated to see how much of an overall contribution that player has made to the team. If they don't hit the mark, they replace the player with someone who will match their targets or expectations. Or they use these statistics to unearth a football player from other teams who matches their playing style and whose skills can be developed and used to enhance their overall contribution to their team once acquired.

So what can the world of sport teach the legal services industry?

If the world of football is anything to go by, the legal services industry worldwide certainly can change its philosophy to assessing the potential of a lawyer to join their ranks and it would benefit from taking inspiration from taking inspiration from Moneyball. If Liverpool can hire what has turned out to be the best left back defender in the world (Andrew Robertson) from Hull City AFC in the Championship Division, one league down from the Premier, then why can’t international law firms be more open to hiring lawyers from domestic law firms, for example, or high performing lawyers from different practice areas or different jurisdictions?

There is, frankly, a goldmine of unearthed high-quality lawyers among many domestic law firms who are of ‘international firm calibre’ as well as lawyers in one practice area who could easily adapt to working in another. Yet law firms shy away from such lawyers willing to retool and would rather adopt a highly conservative 'better the devil you know' approach. Meanwhile, in-house counsels have a good old chuckle at this outmoded perception of lawyers as they can see from their own careers how fluid the skills of an in-house lawyer can be from industry to industry.

Partners and hiring managers need to look at information beyond what’s written on a CV and the size of the cases or deals they have undertaken. Just as Profits Per Equity Partner ("PEP") is an outdated mode of assessing the profitability or financial performance of a law firm, law firms should not simply count the number of zeros on a deal size as an effective measure of how good a lawyer is, as is often the case. Is a lawyer who leads U$5-50m business acquisitions from start to completion for 2 years less of a lawyer at a perceived bigger firm who has been involved only in due diligence reporting on deals worth 100s of millions in the same period?

This idea of adopting Moneyball-style metrics goes beyond the general discussion on the use of AI in recruitment (which is more to assess the calibre of a candidate based on what is written on a CV/resume who uses all the requisite keywords). It needs a much deeper assessment looking at collections, utilisation, business development and marketing efforts to behavioural-based interviews, even presentations. If you use a points system based on numbers of relevant mentions in social media, the press, the legal press, case law citations, published reports and articles, you'll then start to get a vastly different perspective of 'success' and 'quality'.

If we apply Moneyball to Big Law recruitment, you would take objective metrics to find and assess lawyers' potential at lesser known (often domestic) law firms and elevate them to an international law firm. It would be akin to an English Premier League football team hiring a football player from the lower leagues of English football, and not only that, the player slots in seamlessly because their work rate, speed, attitude, and technical ability matches those of his teammates.

Of course, there is a delicate balance that needs to be made between conducting an in-depth assessment of a candidate and turning them off completely because so much more involvement is required on their part to get a job offer. That's not what's being suggested. A lot of data can be acquired from the public domain or for candidates to fill out a questionnaire - it's understanding where to look for the data.

"If you use a points system…you'll then start to get a vastly different perspective of  'success' and 'quality'."

Don't get me wrong. In much the same way that AI will not entirely replace recruiters, neither will the use of data analytics. It's a tool for hiring partners to assess the candidates after the recruiters have introduced or mapped-out candidates for a law firm and can be used in addition to traditional interviews. Alternatively, they could be pre-determined metrics given to recruiters as guidance when conducting a search and assessing the suitability of candidates before introducing them to the law firm.

The above observations are merely scratching the surface of a tried and tested concept in elite sport. Given the costs attached to gathering and analysing such data, initially it may only be accessible to richer law firms when picking out high-calibre and ambitious candidates from a different practice area or different tiered firm. But once the model is established it could easily be adapted to enrich and enhance the recruitment of future star players in the legal services industry.

I would love to hear people's views and comments and what they think of the ethos of Moneyball applying to the recruitment of lawyers. Now we're in the realm of Fantasy Law, what metrics would you use to assess the calibre and potential of a legal qualified candidate? Please comment below!